You are here: Home / Tutorials / How to Airbrush Warhammer Vehicles

Today I want to show you my the most basic approach to airbrushing vehicles. My subject will be the Space Marine Repulsor. This method may be basic but it can take your army a long way. Especially, if you like Heavy Support. I’m trying to show you shading/highlighting principles more than actual colors, so it will work with most of the usual color combinations.

This time it is a commission piece, so I’ll need to match the colors with Castellans of the Rift.
I did a bad job with the cover photo, but trust me it works. 🙂 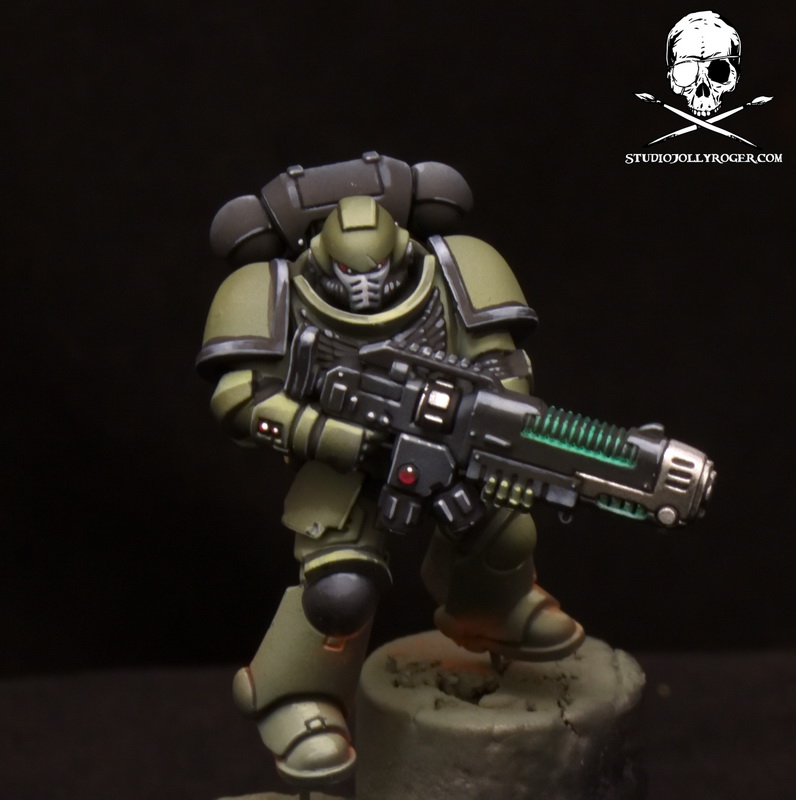 I have the main model assembled, but I left the various parts unassembled and separate. I did it because I want them in different colors and it’s just easier to paint them separately. In this rare case, it’s worth the effort. I also have the hull and turret separate for easy access and handling.

I use only three paints for this purpose and you could easily replace Olive Green with another main color (for example Magic Blue) to get the same results. The few exceptions would be Black, Red, White, and other problematic colors, but other than that feel free to experiment.

Another detail that isn’t on the video is that I used a mix of Olive Green and Black as a primer instead of pure black. It’s really up to you, I did it because I wanted to tone down the contrast just a little bit. As my main color, I’m obviously using Olive Green, but I added just a tiny bit of black to make break the color a little bit. I don’t necessarily want it to be very saturated. However, after the fact, I come to the conclusion that it probably doesn’t matter that much. The less you mix the easier is to recreate the color scheme, so it was probably unnecessary.

I also want the color to be properly diluted. Although, it just the second layer (after the primer), so I still want the proper paint coverage. Usually the more layers I’m doing the more diluted paint I’m using, but there is a ton of exceptions.

With this layer, I want to sketch the overall scheme of lighting. Painting vehicles is different because the zenithal lighting doesn’t work that well. It’s much wiser to use the rule of cool than common sense. I want to break the armor into separate sections, the main principle is that the highlight of one section shouldn’t “meet” with the highlight of the other section.

The easiest way to do it is to use the geometry of the model’s armor. You’ll need to be very diligent with spraying, it is a little bit more complicated than just spraying the base color. By spraying from the right angle I can make sure that the other adjacent section of the armor stays dark. You don’t need to get it right 100% of the time, there are always difficult spots, but it should be relatively easy for the main parts of the vehicle.

If your paint is a little bit too diluted and tens to pool in certain spots it’s better to let it dry and finish it up after a few minutes. You rarely get the perfect paint consistency for airbrushing, so it’s better to have more water in your paint and just do two layers instead of one.

The next layer will drive the contrast further, but even now I have an almost complete scheme of light on the Repulsor. The high contrast is the name of the game for painting vehicles.

Obviously you could use the same principle and use it for painting with a regular brush, but it would take you days to achieve similar results. If you feel that you don’t have full control over the airbrush I would recommend starting with the biggest panels.

To start I’ll need a little bit of my main color. Usually the further you go with highlighting the less paint you need, so I won’t be mixing as much as for the previous step. I’m adding white and a little bit of thinner. I want to have a significant difference in the tone compared to the previous color. Contrary to regular painting in airbrushing you want to have a strong color difference between layers. If you struggle with smooth color transition, just add more thinner.

I’m often testing the paint on my left hand, it’s good to be mindful about that detail and avoid touching the model.

In this phase, I’m just enhancing my previous work. Same angles, same spots just visibly less area covered. The better job I’ll do in this step the less work I’ll have with a regular brush. Mistakes are inevitable, but I want to avoid losing focus and just spraying randomly.

Again, it’s better to paint two layers instead of one. Overall, if you decide you like the result of this phase, you can call it done. However, I’ll do two optional steps than can fix a few potential issues. When you are mixing some colors with white you are often losing saturation. It’s a common problem that your favorite shade of blue isn’t as nice after highlighting with an airbrush. I’m doing this additional step to address that issue. You can also do it if you decide that you covered to much space with Bright Green.

I’ll need my main green color, which is significantly diluted. I’m spraying in between the brightest and the darkest parts. If you do it right it will return some of the color saturation. Try to do it in small steps, it’s easy to do too much and be back to the square one. The last and optional step is using black to add a little bit more contrast in places that you feel it’s not enough. I’m using plain black paint which is again strongly diluted.

If you don’t feel like you have total control over the airbrush and you are happy with your results I would omit this step completely. However, if you do it can be a good way to cover some of your mistakes.

I hope this short tutorial brings something new to the table. After airbrushing you can add edge highlighting which is very popular for all kinds of armor and complements nicely this kind of shading. In my opinion, this method condenses days of painting into a quick session.

You can reach me via Patreon Message or mail: paintcademy@gmail.com
There’s always the option to hire us for painting your miniatures at Studio Jolly Roger.